While pressuring a child to eat is usually done with the best of intentions, it can have unintended consequences. 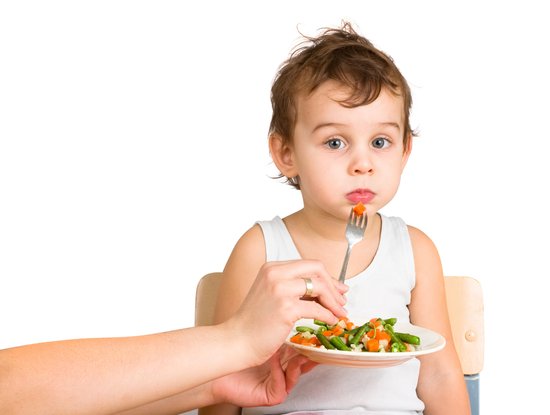 Parents are often worried when their child eats very little, does not eat healthy foods like fruits and vegetables, or refuses a meal completely. For some, this worry can be significant, particularly if the child is not gaining weight well, or is losing weight. For others, uneaten meals can be a source of frustration.

Often parents find themselves using pressure, force or coercion to try and get their child to finish their meal.

This can take many forms:

Using all of these behaviours has the opposite effect to what was intended.

While a child may eat a little more when being coerced, the act of being pressured into eating can lead to the development of negative associations with the food, and ultimately dislike and avoidance. It can also stop children from recognising and responding appropriately to internal signals of hunger and fullness, which can make them more likely to overeat in later life.

Why is it bad to pressure or strongly encourage a child to eat?

Parents' use of pressure to eat often stems from worry and anxiety regarding how or what a child is eating. Parents can become concerned about their child's health and wellbeing (and ultimate survival) if they feel that their child is not eating enough to sustain healthy development. If a child is underweight, parents are more likely to want to encourage eating and may end up using pressure without realising that they may have the opposite effect to that desired.

Parental pressure to eat can also stem from a desire to avoid wasting food that has been prepared, and the belief that children should 'clean their plates'.

However, sometimes the portion sizes that we serve to children are unrealistically large, meaning that it is unrealistic to expect the child to finish the meal and every meal will appear 'unfinished'. In this case, it is not the child eating too little, but the portion size being too large.

Pressure to eat has been linked with a number of negative consequences. These are: 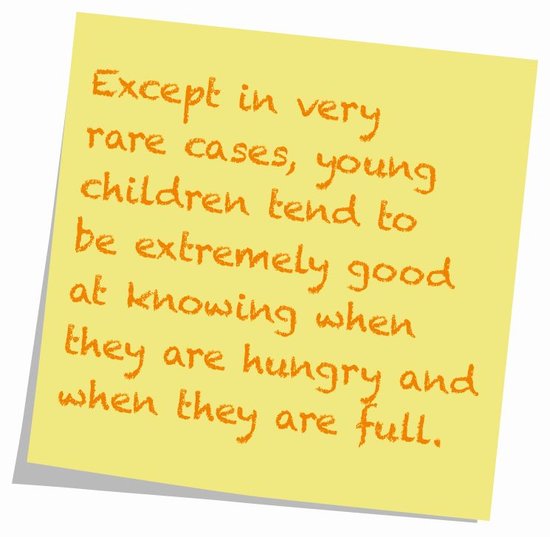 Although hunger and fullness are internal feelings, research has shown that they can be overridden by a number of factors. Pressure to eat is one way by which children might be urged to eat more than their body requires.

Over time, feelings of fullness lose their significance, as they no longer signal that the meal should stop. Rather, children learn to continue eating, even after they start to feel full, stopping only when their plate is empty, or when their parent says that it is okay to stop.

This means that children listen less to their body and so food intake becomes dictated by factors other than what the body requires. Research has also shown that children eat on average 30% more when offered a larger portion of food.

Offering children portion sizes that are too large and pressuring children to eat more than they desire are important factors in the development of overeating and overweight.

What should I do instead?

Except in very rare cases, children are extremely good at knowing when they are hungry and when they are full. Therefore, it is important to trust them and believe that they will eat if they are hungry. By doing this, you should not feel a need to pressure your child to eat. This is something that they will do willingly if their body requires food. Similarly, children's natural tendencies to reject new or bitter foods should not be met with pressure. Rather, keep offering foods and accept refusal, acknowledging that this is a normal developmental phase and that what you do is important in determining whether this is a positive or negative experience for your child. 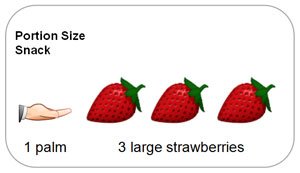 As an example, for a two year old, a palm-sized portion of strawberries would equate to three large strawberries.

(Information about suitable portion sizes for toddlers can be found here.)