Many children refuse to eat certain foods and there is usually a good reason for this behaviour. 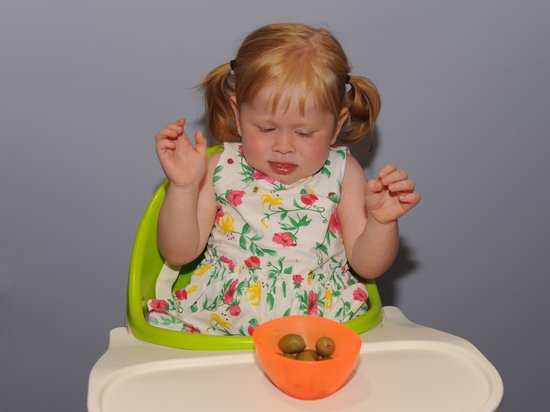 Food refusal (either the refusal of new foods or the refusal of foods that were once eaten without any fuss) reflects a basic fear response. This fear response is actually a normal part of a child's development and the majority of children go through this phase, which tends to peak around 2 years of age.

Children show this fear by refusing to taste new foods that look 'different'. This might be a food that has a colour, shape, or texture that they are not familiar with. As children become more aware of the sensory properties of foods, they also begin to scrutinise all foods that they are given.

Children might also begin refusing foods that were previously liked if they do not match with their newly-formed criteria for 'safe' foods. Children may say that they don't like the food. They might push the food away on their plates and cry if attempts are made to make them eat just a small bite. If a food is tasted, it may be refused on the basis of its sensory properties. Bitter tastes are often disliked and since many vegetables are bitter tasting these are common foods that children predictably tend to refuse.

Why do children often refuse foods?

Fear of new foods (also called food neophobia) is believed to be an evolutionary response that developed as a way of ensuring that our ancestors did not eat any potentially poisonous foods. Our ancestors had to scavenge for food. With no helpful packaging, use-by and best-before dates, they had to be very wary of what they were eating.

Our ancestors would have built up knowledge of which foods were safe to eat, and which were not, through associations between a food's smell and colour and what happened when they ate it. For example, whether it made them sick or not. Based on this, they could make generalisations about other foods; certain colours, smells, or textures suggesting freshness with others predicting danger.

The colour and taste of an apple, for example, would indicate whether it was fresh (green/red and sweet) or whether it had gone bad (brown and bitter). Therefore, our ancestors relied on the look, smell, and taste properties of a food to indicate safety. Unfortunately, since many vegetables have a naturally bitter taste, this is one food group where the process of neophobia can hinder the development of a healthy diet.

As with most evolutionary-rooted responses, their influence is difficult to ignore. Thus, while we don't have to scavenge for food today, and our children are served food that we know is safe, the tendency to be wary of new foods still persists.

Parents have an important role in overcoming childen's food refusal.

Parents and caregivers need to help children to overcome their natural uncertainty and to encourage them to taste and eat new foods. By understanding that new foods, and previously liked foods, may be refused at a predictable stage in children's development, on the basis of their colour, smell, or taste and texture associations, we can begin to see the mealtime from the child's point of view. As a result, we can see clearer ways of how to tackle the behaviour.

A period of fussiness and food refusal is normal.

However, this does not mean that the refusal should be ignored. Liking can be encouraged and this food refusal overcome with a bit of persistence. Parents need to keep exposing their children to the foods that are being rejected in order to increase the familiarity of the different sensory properties and foster acceptance. If food refusal is ignored, children may grow up refusing the same foods for the rest of their lives, leading to a diet that is unnecessarily restricted and lacking in vitamins and minerals.

What can I do?

Children often refuse food because they have a fear of a food based on its unfamiliar or unusual sensory properties, such as appearance, texture, or smell. Understanding this can help you to approach food refusal from a fresh point of view. Rather than considering a child to be a 'picky eater', they are merely expressing an innate trait that we humans all share.

Any phobia is treated by gradually increasing an individual's exposure to the thing that they fear. The same technique can be applied when encouraging children to accept new foods or re-accept previously liked foods. Repeatedly offering a food has been shown to lead to increased willingness to taste the food and increased liking for the food.

Even bitter tastes, which are disliked from birth, can become liked simply through repeatedly offering them. Therefore, parents are encouraged to keep offering foods, even if they are refused and without any pressure to eat.

It may help to think of exposure as a two-pronged tool, fostering acceptance and liking by reducing fear through increasing familiarity.